Skip to content
HomeForget the Doughnut. Meet the Wedge.

I just finished reading Kate Raworth’s book Doughnut Economics: Seven Ways to Think Like a 21st-Century Economist; Raworth also has a whole website dedicated to the concept of the Doughnut as a way of rethinking economics.

The book is very easy to read, and manages to be open to a wide audience with only basic economics knowledge without feeling patronizing or condescending. Most of the core ideas are fundamentally sound, though Raworth has a way of making it sound like she is being revolutionary even when most mainstream economists already agree with the core ideas.

For example, she makes it sound like it is some sort of dogma among neoclassical economists that GDP growth must continue at the same pace forever. As I discussed in an earlier post, the idea that growth will slow down is not radical in economics—it is basically taken for granted in the standard neoclassical growth models.

Even the core concept of the Doughnut isn’t all that radical. It’s based on the recognition that economic development is necessary to end poverty, but resources are not unlimited. Then combine that with two key assumptions: GDP growth requires growth in energy consumption, and growth in energy consumption requires increased carbon emissions. Then, the goal should be to stay within a certain range: We want to be high enough to not have poverty, but low enough to not exceed our carbon budget.

Why a doughnut? That’s… actually a really good question. The concept Raworth presents is a fundamentally one-dimensional object; there’s no reason for it to be doughnut-shaped. She could just as well have drawn it on a single continuum, with poverty at one end, unsustainability at the other end, and a sweet spot in the middle. The doughnut shape adds some visual appeal, but no real information.

But the fundamental assumptions that GDP requires energy and energy requires carbon emissions are simply false—especially the second one. Always keep one thing in mind whenever you’re reading something by environmentalists telling you we need to reduce economic output to save the Earth: Nuclear power does not produce carbon emissions.

This is how the environmentalist movement has shot itself—and the world—in the foot for the last 50 years. They continually refuse to admit that nuclear power is the best hope we have for achieving both economic development and ecological sustainability. They have let their political biases cloud their judgment on what is actually best for humanity’s future.

I will give Raworth some credit for not buying into the pipe dream that we can somehow transition rapidly to an entirely solar and wind-based power grid—renewables only produce 6% of world energy (the most they ever have), while nuclear produces 10%. And nuclear power certainly has its downsides, particularly in its high cost of construction. It may in fact be the case that we need to reduce economic output somewhat, particularly in the very richest countries, and if so, we need to find a way to do that without causing social and political collapse.

So let me present you with an actual two-dimensional object, which I call the Wedge.

On this graph, the orange dots plot actual GDP per capita (at purchasing power parity) on the X axis against actual CO2 emissions per capita on the Y-axis. The green horizonal line is a CO2 emission target of 3 tonnes per person per year based on reports from the International Panel on Climate Change. 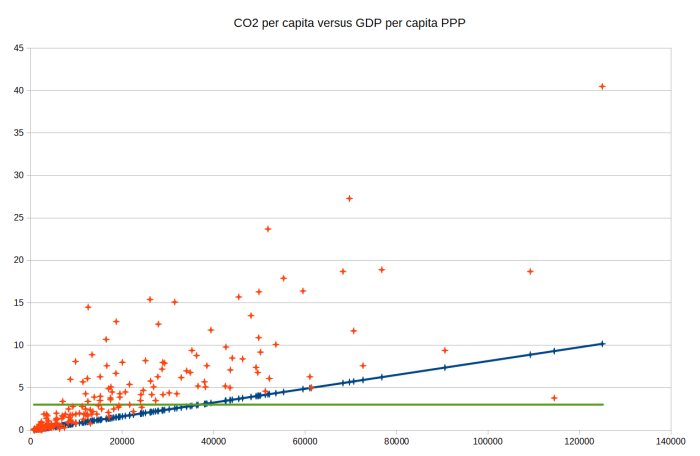 As you can see, most countries are above the green line. That’s bad. We need the whole world below that green line. The countries that are below the line are largely poor countries, with a handful of middle-income countries mixed in.

But it’s the blue diagonal line that really makes this graph significant, what makes it the Wedge. That line uses Switzerland’s level of efficiency to estimate a frontier of what’s possible. Switzerland’s ratio of GDP to CO2 is the best in the world, among countries where the data actually looks reliable. A handful of other countries do better in the data, but for some (Macau) it’s obviously due to poor counting of indirect emissions and for others (Rwanda, Chad, Burundi) we just don’t have good data at all. I think Switzerland’s efficiency level of $12,000 per ton of CO2 is about as good as can be reasonably expected for most countries over the long run.

Our goal should be to move as far right on the graph as we can (toward higher levels of economic development), but always staying inside this Wedge: Above the green line, our CO2 emissions are too high. Below the blue line may not be technologically feasible (though of course it’s worth a try). We want to aim for the point of the wedge, where GDP is as high as possible but emissions are still below safe targets.

Zooming in on the graph gives a better view of the Wedge.

Some countries are within the Wedge; a few, like Uruguay, quite close to the point, and many, like Colombia and Bangladesh, that are below and to the left. For these countries, a “stay the course” policy is the way to go: If they keep up what they are doing, they can continue to experience economic growth without exceeding their emission targets.

There are some countries, like Sweden, France, and Switzerland, that are close to the blue line but still outside the Wedge because they are too far to the right. These are countries for whom “degrowth” policies might actually make sense: They are being as efficient in their use of resources as may be technologically feasible, but are simply producing too much output. They need to find a way to scale back their economies without causing social and political collapse. My suggestion, for what it’s worth, is progressive taxation. In addition to carbon taxes (which are a no-brainer), make income taxes so high that they start actually reducing GDP, and do so without fear, since that’s part of the point; then redistribute all the income as evenly as possible so that lower total income comes with much lower inequality and the eradication of poverty. Most of the country will then be no worse off than they were, so social and political unrest seems unlikely. Call it “socialism” if you like, but I’m not suggesting collectivization of industry or the uprising of the proletariat; I just want everyone to adopt the income tax rates the US had in the 1950s.

But most countries are not even close to the blue line; they are well above it. In all these countries, the goal should not be to reduce economic output, but to increase the carbon efficiency of that output. Increased efficiency has no downside (other than the transition cost to implement it): It makes you better off ecologically without making you worse off economically. Bahrain has about the same GDP per capita as Sweden but produces over five times the per-capita carbon emissions. Simply by copying Sweden they could reduce their emissions by almost 19 tonnes per person per year, which is more than the per-capita output of the US (and we’re hardly models of efficiency)—at absolutely no cost in GDP.

Then there are countries like Mongolia, which produces only $12,500 in GDP but 14.5 tonnes of CO2 per person per year. Mongolia is far above and to the left of the point of the Wedge, meaning that they could both increase their GDP and decrease their emissions by adopting the model of more efficient countries. Telling these countries that “degrowth” is the answer is beyond perverse—cut Mongolia’s GDP by 2/3 and you would throw them into poverty without even bringing carbon emissions down to target.

We don’t need to overthrow capitalism or even give up on GDP growth in general. We need to focus on carbon, carbon, carbon: All economic policy from this point forward should be made with CO2 reduction in mind. If that means reducing GDP, we may have to accept that; but often it won’t. Switching to nuclear power and public transit would dramatically reduce emissions but need have no harmful effect on economic output—in fact, the large investment required could pull a country out of recession.

Don’t worry about the Doughnut. Aim for the point of the Wedge.

4 thoughts on “Forget the Doughnut. Meet the Wedge.”